A source-control branching model, where developers collaborate on code in a single branch called ‘trunk’ *, resist any pressure to create other long-lived development branches by employing documented techniques. They therefore avoid merge hell, do not break the build, and live happily ever after.

Shared branches off mainline/main/trunk are bad at any release cadence: 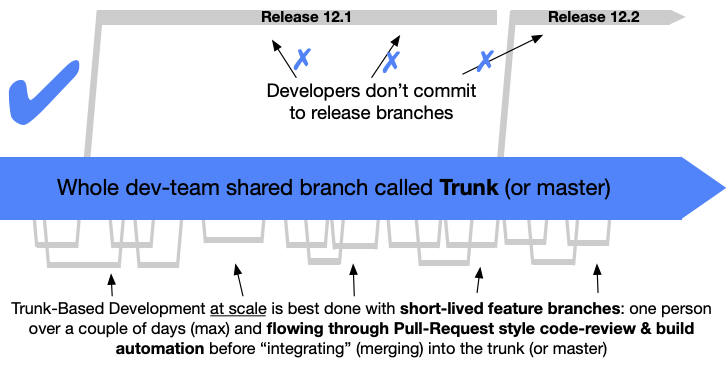 The dividing line between small team Trunk-Based Development and scaled Trunk-Based Development is a subject to team size and commit rate consideration. The precise moment a dev team is no longer “small” and has transitioned to “scaled” is subject to practitioner debate. Regardless, teams perform a full “pre integrate” build (compile, unit tests, integration tests) on their dev workstations before committing/pushing for others (or bots) to see.

Trunk-Based Development is not a new branching model. The word ‘trunk’ is referent to the concept of a growing tree, where the fattest and longest span is the trunk, not the branches that radiate from it and are of more limited length.

It has been a lesser known branching model of choice since the mid-nineties and considered tactically since the eighties. The largest of development organizations, like Google (as mentioned) and Facebook practice it at scale.

Over 30 years different advances to source-control technologies and related tools/techniques have made Trunk-Based Development more (and occasionally less) prevalent, but it has been a branching model that many have stuck with through the years.

This site attempts to collect all the related facts, rationale and techniques for Trunk-Based Development together in one place, complete with twenty-five diagrams to help explain things. All without using TBD as an acronym even twice.

© 2017-2020: Paul Hammant, with contributions from friends. Site built with Hugo with Material theme, via Netlify.   Contribute to this page